Hey you there, yes you…. wild water lover, kayaker, adrenaline junkie or pure beginner! Here are some facts about kayaks through history for you. When you enter your kayak and preparing yourself to tame another river, do you ever think about how your kayak became so fast? Light weighted and tough enough to survive the most extreme water conditions?

Can you imagine yourself?

The design and appearance of kayaks through history have undergone a revolution since trees were first hollowed out by early tribesmen. Can you imagine yourself running rapids on a log? Whilst paddling just with makeshift poles made from strong, stout branches? It didn’t take long for the early tribes to realize that a better and more stable alternative was a hollowed-out log. Depending on the type of tree and tool available, the log was either scraped out or had a fire lit on top, burning out a hollow. Eventually, people acquired the necessary tools and skills to construct a more manageable boat from scratch, using a variety of smaller components. And this is how and when the distinct and quite separate form of kayak first appeared.

The Inuit man with a kayak

The Inuit and Aleut tribes of Arctic North America were the first people to build and use kayaks. They’ve built them either with light driftwood, while the others were made by stretching animal skins over frames made of whalebone. Whale fat was used to waterproof the vessels. The smaller kayaks were primarily used for hunting. The word kayak actually means “hunter’s boat.” Inuit also made umiaq (“woman’s boat”), larger open boats made of wood frames covered with animal skins, for transporting people, goods, and dogs. They were 6–12 m (20–39 ft) long and had a flat bottom so that the boats could come close to shore. 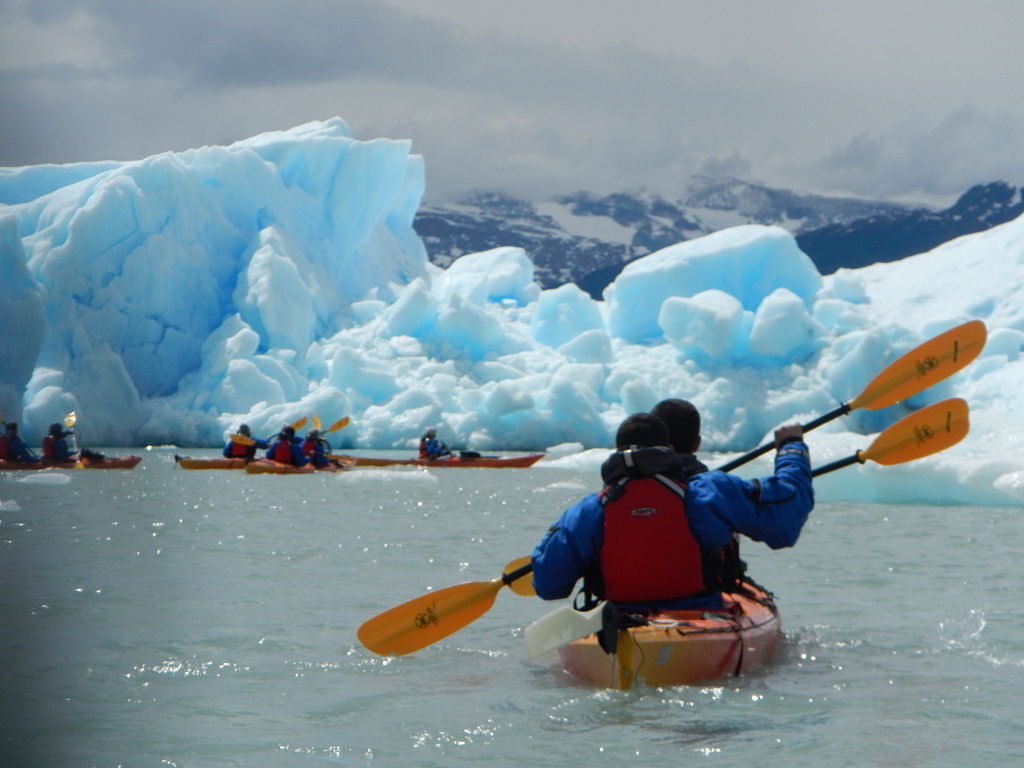 Europeans met with kayaks in the early to mid-1800s. Germans and French actually began to use kayaking for sport. Kayaks also maintained their practical use in icy waters — explorers of the North Pole and the South Pole carried them in their expeditions. Adventure in a means of kayaking came soon after that.  In 1931, a man named Adolf Anderle became the first person to kayak down the Salzachofen Gorge. This may have been the birth of modern white-water kayaking. In 1936, the Olympics included kayak races in the Berlin games.

The United States began to get on board at this point, so did women. Two years after the Olympics, Genevieve De Colmont paddled the white-water of the Green and Colorado rivers. Fiberglass “rigid” kayaks came on the scene in the 1950s and were the standard until polyethylene plastic took over in the 1980s. Kayaking, enjoyed modest participation, as a fringe sport in the U.S. until the 1970s. When it began to move more mainstream. Now the Olympic Games feature more than 10 different white-water kayak events.

With the introduction of modern materials. Including mass-produced woven fabrics and smooth-planed wood. While there are still a few Inuit hunting boats made from sealskins.

But, within 20 years, fiberglass (or glass-reinforced plastic) had totally revolutionized boat construction, and most boats were now made this way. For the first time, it was possible to make more rounded shapes and countless new designs soon flooded the paddling world. In the 1980s, fiberglass and even more advanced composites, such as carbon fiber and Kevlar, were dramatically overshadowed by plastic. The advent of plastic suddenly made it possible to mass-produce cheap and durable kayaks almost rival the more expensive and fragile composite boats. The kayak became a recreational and sporting boat in the twentieth century.

Jumping off a nine-meter high waterfall on Zrmanja River

By the 1930s, the general purpose and whitewater kayak had settled into a fairly widely accepted form, about 4m long and 60cm wide across the beam. For most of the late twentieth century, they were the driving force behind the new look of the kayaks. At about the same time, slalom racers realized that the boats performed much better if they were very low in volume. With thin pointed ends that could dip under the hanging poles, and slice better through the water to save time as they raced down the course.

This development resulted in the invention of many of the techniques that have shaped the sport as it is today and changed the way kayaks look forever. The modern kayak is so strong and versatile that even moderately experienced practitioners can tackle difficult feats. That is one of the reasons why kayaking has recently become so popular, with many disciplines that provides, it merges all the thrills and spills of surfing.

One of the most beautiful European rivers

If you ever decide to visit one of the most beautiful European rivers, Zrmanja, and enjoy our Zrmanja Canoe Safari trip, you’ll get a chance to try out professional custom made inflatable sit-on-top kayaks. Designed with a little help of Raftrek’s frontman Davor Kos, to keep the travertine safe. So that Zrmanja stays one of the most beautiful rivers in Europe.  Kayaks are really fun, you get to navigate them yourself and enjoy the river in its fullest. But still, they are stable and safe enough to provide a great time even to a total beginner.

Studying Tourism at the Faculty of Economics and Business she set her professional path. Although first working in marketing and accounting she returned to her true love: tourism. Eager to help every single guest and trying to answer on inquiries at the speed of lighting she will make your stay in Croatia pleasing as a light breeze. In love with nature she enjoys relaxing in the woods, walking alongside the coast and spending her free time outdoors especially skiing in the Alps. Visiting other countries and traveling around fills her with new energy and positive vibes she shares with others.

Tips for students when you plan your trip to Croatia

Raftrek Travel is in search of new adventure guides!